Andrew Sarris gave a lecture at the SVA Amphitheatre at 209 E. 23rd Street in March 1968. The same year, he published his influential The American Cinema: Directors and Directions 1929-1968, which contains the crystallization of his “auteur theory” of cinema (its profiles of various directors represents an elaboration on the 1962 essay “Notes on the Auteur Theory”). Sarris was already an instructor of screenwriting at the school, but this lecture “on the films of 1967, domestic and foreign” likely made use of his evolving theory of cinema. 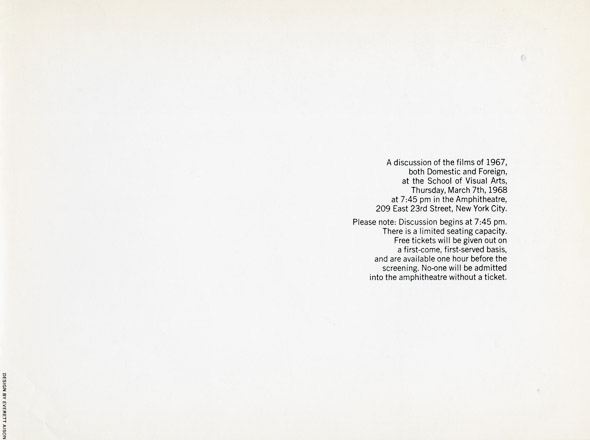 In the bottom-left corner of the reverse, the design is attributed to Everett Aison — a longtime instructor and founding chair of the film department — who would also go on to write three screenplays and a novel. In the early 60s, he designed film titles and the U.S. promotional campaigns for Roman Polanski’s first major feature, Knife In The Water, and Akira Kurosawa’s Yojimbo (the latter, incidentally, Sarris slagged).