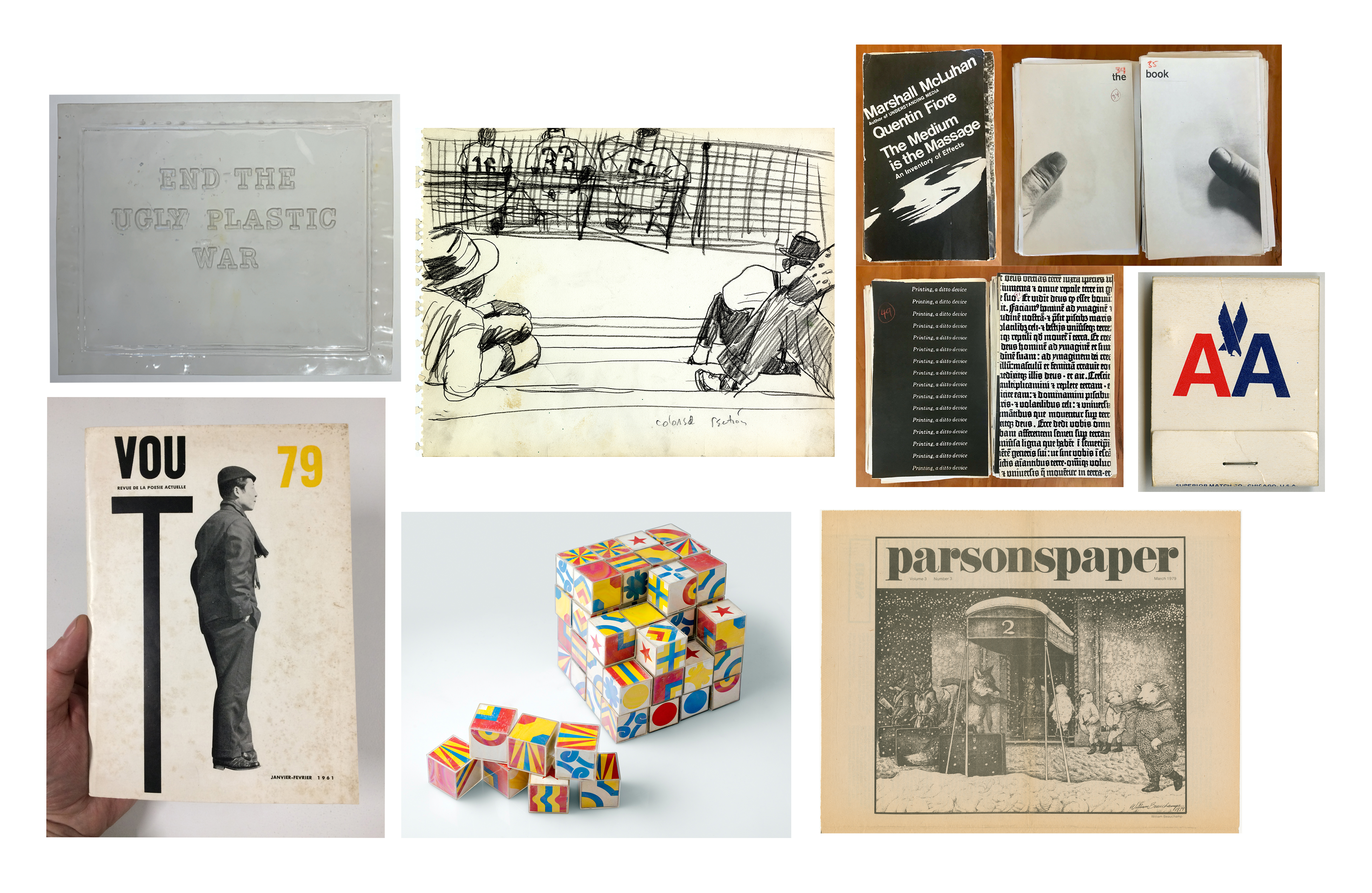 One of the great joys of being a design archivist is continued access to a tremendous number of obscure and unknown works. Archives visitors can experience that thrill of discovery when explore the holdings of design archives. In preparation for "Archives By Design," our upcoming symposium at SVA on preserving the work of designers and illustrators, we asked the panelists to share a hidden gen from their collections.

From Douglas Dowd, DB Dowd Modern Graphic History Library, Washington University in St. Louis: Among my favorite pieces in the Dowd Modern Graphic History Library collections is a sketchbook that illustrator Robert Weaver took to Florida in February 1962 on assignment for Sports Illustrated. Dick Gangel sent him to cover spring training for the magazine, and the resulting feature, "Spring Training: Fresh Starts and Old Hopes," ran in the March 5, 1962 issue. The sketchbook captures Weaver at work, documenting the game as a social phenomenon. This particular image isolates a disconcerting reality: An integrated game is bracketed by segregated stands. Florida ballparks still had "white" and "colored" sections in 1962, even though Jackie Robinson would enter the Hall of Fame that summer, having broken the color barrier in '47. Weaver dryly notes "colored section" section in his drawing. This artifact (and other pages from this sketchbook) isolates why we collect the work of illustrators and associated process materials. It captures the convergence of journalism, art, race, sport, and publishing in a transitional moment, fraught with contradiction.

From Jennifer Whitlock, Vignelli Center for Design Studies, Rochester Institute of Technology: While at Unimark International in 1967, Massimo Vignelli designed the corporate identity for American Airlines. The airline used this identity until 2013 when it re-branded. But this matchbook isn’t just documenting the story of graphic design. As with most design archives, it tells a bigger story about our history and culture. Smoking is no longer allowed on planes. But the 1960s were a different era. When was the last time you got a book of matches, especially from an airline? They used to be handed out frequently as a cheap form of advertisement, but they are not so common anymore.  Matchbooks are not created to be preserved forever. They are meant to be ephemeral and to be used up. We have many examples of matchbooks in the archives, but they raise another preservation concern. They are flammable. If the matches are still intact, they get a special coating so they cannot ignite.


From Jeanne Swadosh, The New School Archives and Special Collections: This is the front page of the Parsons School of Design student newspaper, Parsonspaper, which ran from 1976 to 1990. As a publication, it is my favorite title in The New School Archives, and I never tire of consulting it. I still laugh at the gag images even after seeing them for the hundredth time, and the visual reportage from student trips to the Soviet Union, for example, never fails to take my breath away. This particular cover illustration by William “Bill” Beauchamp expresses so much about not just the Parsons experience but coming to New York as an innocent lamb of a student and leaving as a sharp, wily fox. It wordlessly communicates everything you need to know and more. The awning is the former main entrance of Parsons School of Design at 2 West 13th Street. William Beauchamp typifies our archival endeavor, too. He is not famous, but he is someone who has worked for forty years as a designer and illustrator, using his talents and what he learned at Parsons. Individuals such as Mr. Beauchamp form the bedrock of the Kellen Design Archives’ collections.


From Rob Saunders, Letterform Archive: One hidden gem in our collection is Quentin Fiore's layout dummy for the paperback version of Marshall McLuhan's The Medium in the Massage. This delightful artifact walked through our door a few months ago, donated by a Facebook employee whose wife is a McLuhan decendant.


From Alexander Tochilovsky, Herb Lubalin Center of Design and Typography, The Cooper Union: I picked this piece because it's so unusual within the larger design canon. It's a Japanese magazine with a French name. It's called VOU and was designed by Kitasono Katue, who is better known as a surrealist poet and an artist rather than as a designer. But what a great designer! For someone who was not primarily a designer he still managed to design over 500 magazines and poetry books, and designed the covers for many novels, and commercial magazines and journals. This stylish cover is for the January/February 1961 issue. I encountered this in a small bookshop in Tokyo and it revealed to me an amazing and prolific individual who was technically working outside of the design industry.


From Josh MacPhee, Interference Archive: It’s always difficult to pick a single item out of an archive and valorize it above everything else, especially since there are so many different criteria we can use to give something value. Honestly, I’m choosing this one because I have the photo sitting on my desktop, and it is a cool and unique thing. This is one of a small handful of plastic posters created by striking students at the University of California Berkeley in 1970. Fifty years ago, hundreds of thousands of students went on strike in opposition to then-President Nixon bombing Cambodia and expanding the Vietnam War. Many people know of the students killed by the National Guard at Kent State, but not that this was part of the largest strike in the history of the United States. Students at campuses across the country began turning parts of their schools into agit-prop factories just as the French students had in 1968. The most well known of these was at UC-Berkeley, which produced hundreds of single-color screenprinted posters, most of them recognizable for the tractor-feed holes in the very early computer paper they were printed on. But some strikers also experimented with a VacuForm and pieces of solid type, creating a series of “End the Plastic War” posters out of plastic itself. We were lucky enough to have one of these posters donated to Interference Archive by Marty Lucas, who now teaches at Hunter College, but in 1970 was a teenager who had just arrived at Berkeley when the strike began and threw himself into the moment.

In 1965, Art in America invited a group of artists to create toys that would rival the Slinky in conception and design. Milton Glaser designed “Cubismo,” a set of sixty-four painted wooden cubes with twenty-four design motifs. The blocks could be arranged and rearranged in numerous patterns, or, of course, in no order at all. Glaser’s blocks were later manufactured for sale; while looking at slides of the interior of Childcraft, a Manhattan toy store designed by Glaser in 1970, I spotted Cubismo on the shelves.

We have Cubismo in the Archives. It is just lovely to look at on its own, but of special interest to me are the curvilinear and rectolinear designs on the blocks. They’re the same shapes, drawn from art historical styles, that surface repeatedly in the work of Glaser and Push Pin Studios and formed the basis for the psychedelic style they pioneered in the 1960s. I love the ingenious ways Glaser arranged the forms on the blocks, and I imagine kids’ delight in discovering the surprising patterns they could devise.