In March 1976, Sol LeWitt had his first solo exhibition at the Visual Arts Museum (209 E. 23rd Street). The work exhibited wasn’t the piece itself, but rather the result of instructions he gave to third parties: they assembled a large graphic combination drawn from a vocabulary of white-on-black linear figures provided by the artist. Instead of hiring technicians or specialists to screen the shapes in a particular order, the artist made explicit that the idea or set of instructions for the art was itself the art, rather than the artifact it produced. He continued the process across several similar pieces, some of which used the same graphic forms—one, Wall Drawing #260, was the subject of a recent focus exhibition at the Museum of Modern Art. 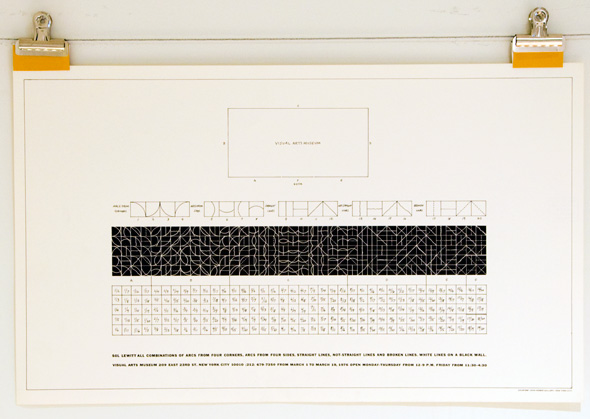 The poster for Lewitt’s exhibition at the School of Visual Arts, 1976.

LeWitt, who studied at SVA in the 1950s, received his first retrospective at MoMA two years after his VA Museum show, in 1978. In December of last year, the museum revisited some of this same work, installing (enacting?) Wall Drawing #260 on its fourth floor landing. A central conceit of the work is the distancing of final form from the artist. Its presentation as a large, mural-like graphic and the distribution of the process of its creation tempers an attack on the idea of discrete value in the art-object with a sense of social inclusiveness. 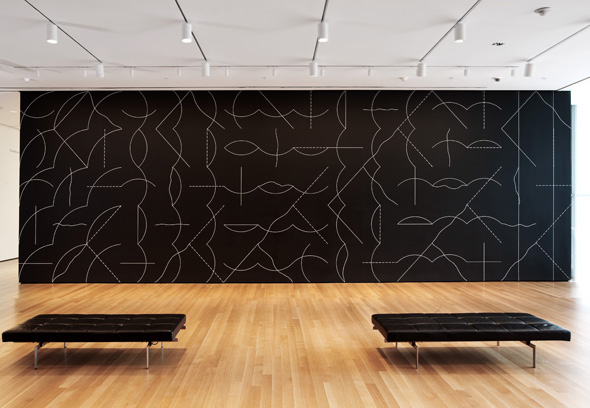 The press release for the MoMA show describes how the artist thought of this work:

LeWitt compared his role to that of a composer who creates a score that may be played by musicians for generations to come. The concept—or score—remains constant, but the wall drawing, like a musical performance, will vary slightly each time it is realized anew.