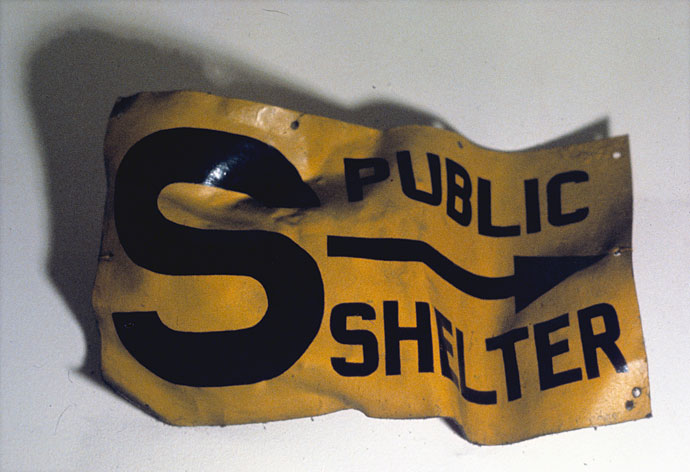 Tony Palladino contributed this sign — a found object — to the 1966 Museum of Modern Art exhibition The Object Transformed. Curated by Mildred Constantine and Arthur Drexler for the museum’s Architecture and Design Department, it featured works by Jasper Johns, Man Ray, Bruno Minari, Meret Oppenheim, Robert Rauschenberg, and others. In the New York Times, John Canaday wrote,

“The Object Transformed” is a collection of utilitarian objects—chairs, books, mattresses, radio sets, cutlery, articles of clothing and the like—that artists or designers have transformed in a variety of ways, sometimes humourously, often monstrously, but always expressively in one direction or another.

In the introduction to the exhibition’s catalogue (designed by Massimo Vignelli), Constantine describes the objects as “apparitions of everyday reality, complete with overtones of grim absurdity,” and suggests “for the 20th century they may be the most appropriate kind of still life.” Admission was $1.25.