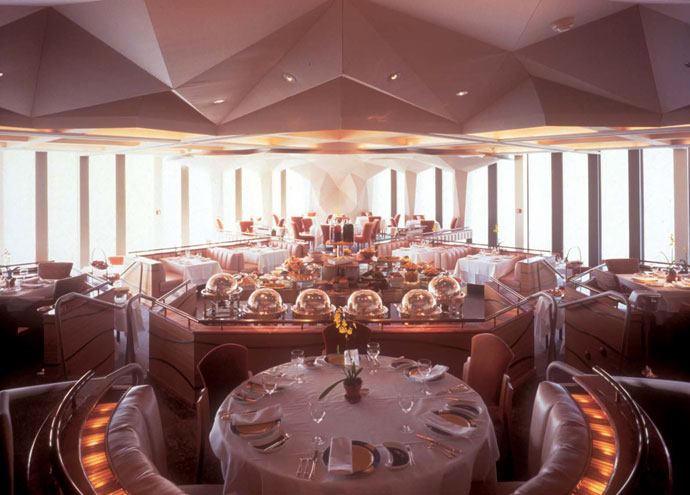 View of the dining room at Windows On The World, as redone in 1996.

The world of Windows On The World

Well since the last post on the dining options at the World Trade Center, I’ve kept running across additional leads that I wished I’d known about to include in that listing. For example, the Big Kitchen food mall in the WTC’s concourse was organized by one of the early popularizers of French food in America, Jacques Pépin (who is a personal favorite TV chef). It was apparently the first such mall in America (which probably means anywhere).

All the way on the other end of the tower, the ultra-luxe Windows On The World restaurant — which, along with every other food-purveyor in the complex, was headed up by restaurateur Joe Baum — hired James Beard (Baum’s old pal, who likely had many a free drink at Baum’s Four Seasons bar) to be the food consultant.

Accounts of the project usually detail how Beard and Baum and Glaser and several other top-level consultants collaborated on Windows On The World when the WTC was implementing its food services in 1976. But I noticed in the archive we have examples from this project (grouped together for reasons of provenance) that come from two distinct phases: the founding of the restaurant in 1976 and a re-design in the mid-90s (though there are indications Glaser worked on everything in the room, bottom to top).

The story of the restaurant, it turns out, is amazingly consonant with that of the building. The first terrorist attack on the WTC — the bombing on 26 February 1993, which fell short of the perpetrators’ intentions, but still damaged the structure of the building — led to the iconic Windows restaurant laying dormant for three years. It had, up to that point, changed hands a few times: Baum’s group handed it over to Hilton, during which time the quality apparently suffered; Hilton in turn sloughed it off to the UK hotel chain Ladbroke, in whose stewardship it declined even more. 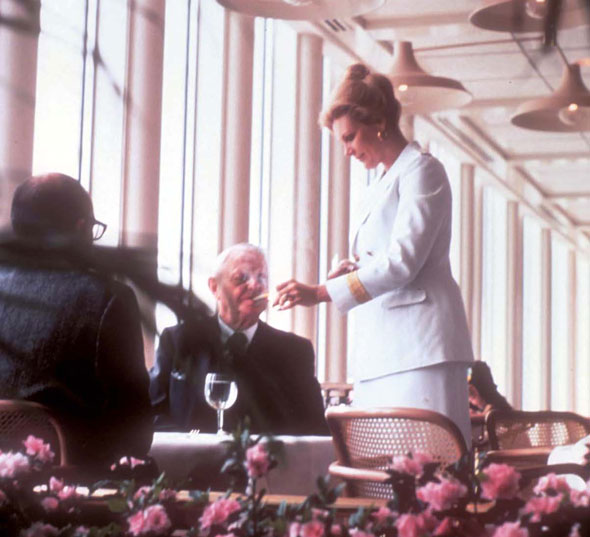 WOTW restaurant, 1976. Photograph from the Nestlé library. Not a scene that happens much anymore.

After the 1993 bombing, the Port Authority undertook repairs on the 106th and 107th floors, which had suffered severe structural problems, and at the same time began soliciting bids for the new operators of Windows On The World. The finalists for the bid were prominent New York restaurant impresarios: Allan Wollensky, of Smith and Wollensky; Warner LeRoy, who ran Tavern on the Green; David Bouley; and once again Joe Baum, who was, at the time, operating the Rainbow Room (also a Milton Glaser production). Baum prevailed, and brought back his whole original ’76 team. The budget was $25m. Their redesign reconfigured the space so that the main restaurant room straddled both floors, and gave every seat a plum view. But one kink remained: the food. As I wrote before,

And that was the 1976 menu! In 1996 they were still focusing on “world cuisine” (I guess the rather literally-minded justification being that the “Windows” were “On” said “World”). After a bunch of bad reviews they decided bring the buffet, a la carte service, and bar menu — previously entirely separate services — under the control of one chef. New hire Michael Lomonaco, hot off the 21 Club, whipped the menu into shape. He describes his approach in a 2010 interview,

When I got there, “global cuisine” was the phrase they used: the menu had a dish from Holland, Hong Kong, South Africa… It didn’t have a personality. I thought what we had to do was get back to Joe Baum’s original vision, and to spotlight American cooking, ingredients that were grown and raised and caught here. 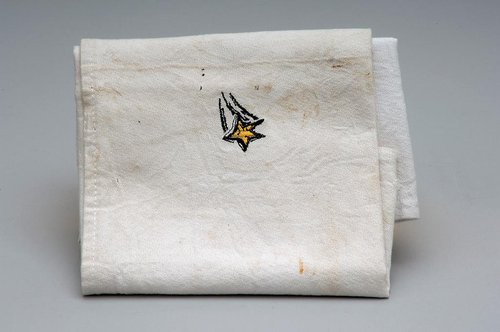 Napkin from the Wild Blue restaurant, rescued from the WTC ruins December 2001. From the Smithsonian.

So there it is: Jacques Pépin’s Big Kitchen in 1976 put the emphasis on a produce-centric, fresh and simple cuisine. In 1996, upstairs, Lomonaco revised the same principle into line with Alice Waters’ local food philosophy. This was particularly apparent in the somewhat more casual steakhouse, Wild Blue, which replaced the 1976 Windows On The World special room Cellar In The Sky. I’m pretty sure the Wild Blue name was lifted from one of the Cellar’s adjacent banquet rooms — the Nestlé library has photos of a “Rose Room” along with “Wild Blue,” both dated 1976. 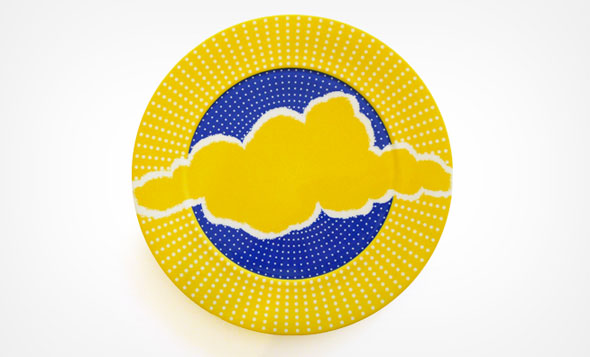 Plate designed for Windows On The World restaurant reopening, ca. 1996.

On his new (rather snazzy) website, Milton groups both ’76 and ’96 designs for the WOTW together which was a little confusing to me at first, since they’re two decades apart and stylistically very different. Though the treatment of the menu, it is true, uses the same sun-motif, the scale has changed. 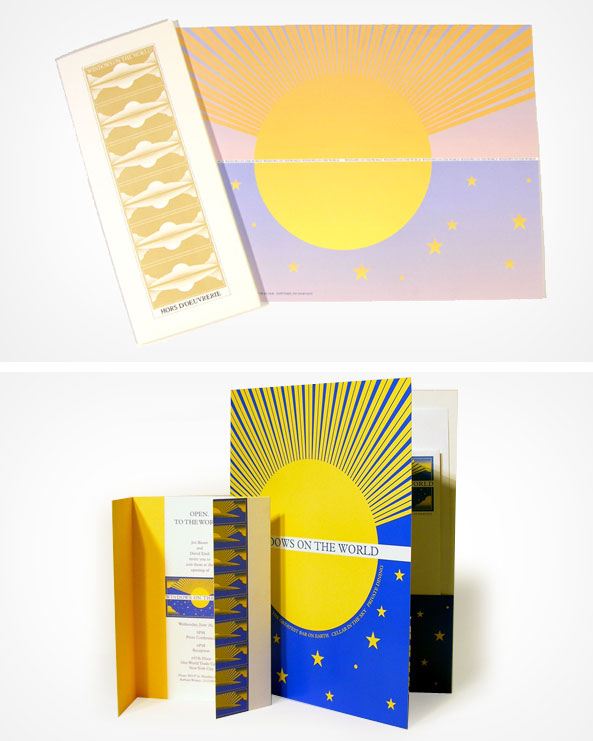 The interior was also totally different. Apart from reconfiguring the entire restaurant seating system around the view, the style departs from the original Deco meteorological symbolism in favor of sci-fi-ish geometrical treatments of space (like the irregular vertices of the ceiling). The lounge room of the original restaurant was lined with brass globes that echoed the sun motif, and featured light, natural materials (like the chairs below by Warren Platner, who was the interior architect on the whole project). The ’90s version (pictured at the top of the post) kept some golden orbs (at the buffet) but replaced the Platner furniture and muted textural variation of the wall textiles with pristine white and chrome. 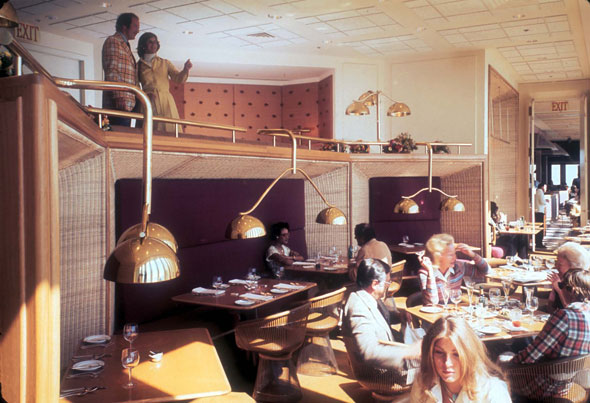 Interior of the Windows On The World restaurant, ca. 1976. Designed by Warren Platner and Milton Glaser. Photograph from the Nestlé library.

The Cellar In The Sky, the more intimate dining room at the 1976 WOTW, was not revived. An early advertisement from the archive touts it as “the jewel of the Windows of the World … light, filtered through racks of great wines, dapples each table like moonlight.” The tables are certainly dappled, but I’m not entirely convinced this is the work of the wine-bottles rather than clever lighting design. 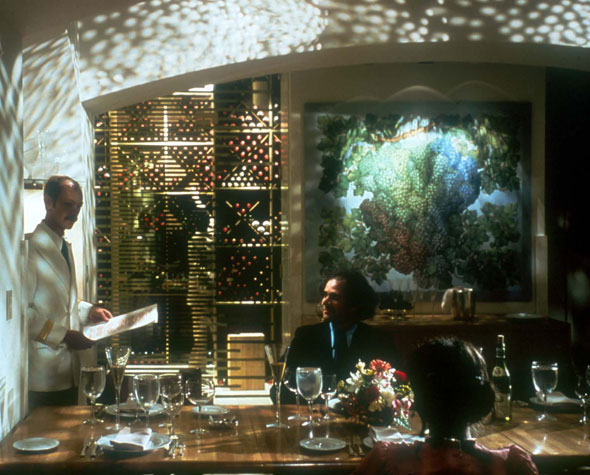 Cellar In The Sky, ca. 1976. Photograph from the Nestlé library.

This charmingly eccentric bit of Mediterrania was, perhaps, a reflection of the New York of its day, while the 1996 addition of the so-named Greatest Bar In The World was a reflection of its contemporary New York, as might be pieced together from this reminiscence from the Chicago Bar Project site:

Greatest Bar on Earth patrons consisted of an interesting mix of tourists from all over the world, Wall Street-types, lounge lizards, and pick-up chicks looking for a sugar-daddy. Time Out New York noted that, “Mixed in among the yuppies and cocktail nation twits here is a sizable delegation of actual hipsters–DJs, fashion and design fold, and other party people.” Whether tourists or the young and affluent, all came to enjoy a selection of booze that included 16 different kinds of vodka, 1,500 wines (!), and a variety of specialty cocktails like the WOW Martini, Mandarin Crush, and Ellis Island Iced Tea. Mixed drinks were not for the faint of heart, as prices ranged from $8 to $16 (for a Cosmopolitan) … Bands typically came on after 9:00 p.m., and consisted of classic funk Mondays; R&B Tuesdays; “Mondo 107 Lounge” Wednesdays; “Mambo, Baby” Latin Thursdays; “Glitter” Disco Fridays; Saturday night “Swing!” … 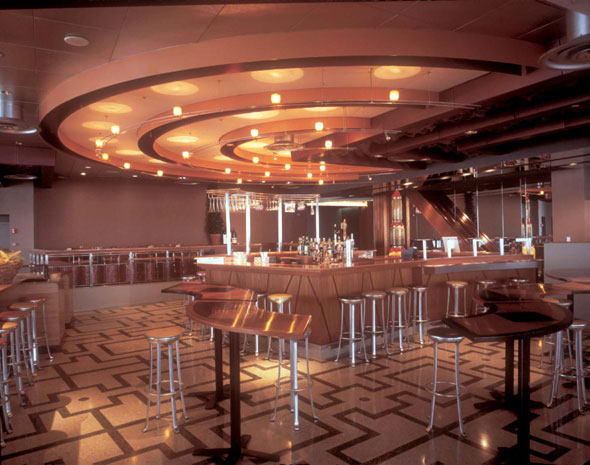 View of “The Greatest Bar in the World” in the World Trade Center, 1996. Photograph from the Nestlé library.

See also: the earlier part of this story.