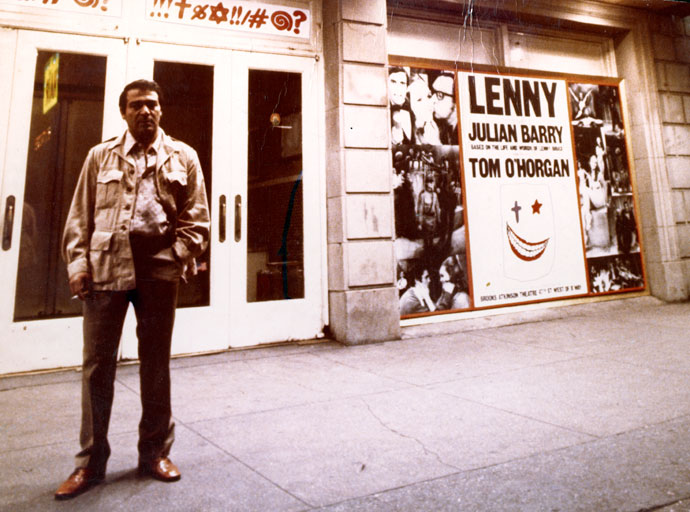 Tony Palladino Collection Box 20b. Photograph of Palladino, who designed the graphics for Julian Barry’s play Lenny, in front of the Brooks Atkinson Theatre, c. 1971.

It is with great sadness I write that Tony Palladino, a designer and artist of a singular vision, passed away on Wednesday. Tony had been a fixture at SVA for fifty years, where he taught design and created some of the school’s most memorable subway posters. Tony’s work was always witty and surprising, highly conceptual but immediately comprehensible. Tony once said, “We had a thing going with Ivan [Chermayeff], Bob Gill, myself and other guys, that would go like this. If the idea is good you should be able to tell it over the telephone. If it worked over the telephone, bingo.”

It’s difficult to pick a favorite of Tony’s subway posters. His first poster for the school, in 1961, featured bright red geraniums painted over a color-by-number guide; the flowers practically exploded off the paper. In an essay for Tony’s 1999 Masters Series exhibition, SVA Galleries Director Francis Di Tommaso recounts how Tony told him, “I compete with flowers in my work. It’s got to be that good.” 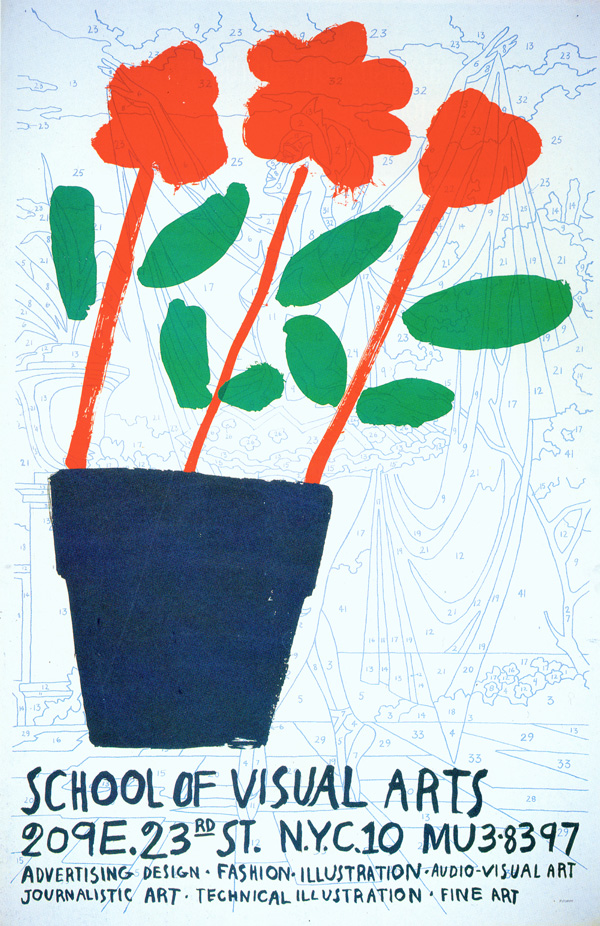 But the poster that most perfectly represents how Tony experienced the world was his 1989 interpretation of the phrase “Even a great idea is only an idea until you make it real,” in which he reinvented a dented and discarded hub cab as a cheerful red Sunday hat (see here for more of Tony’s painted hub caps). 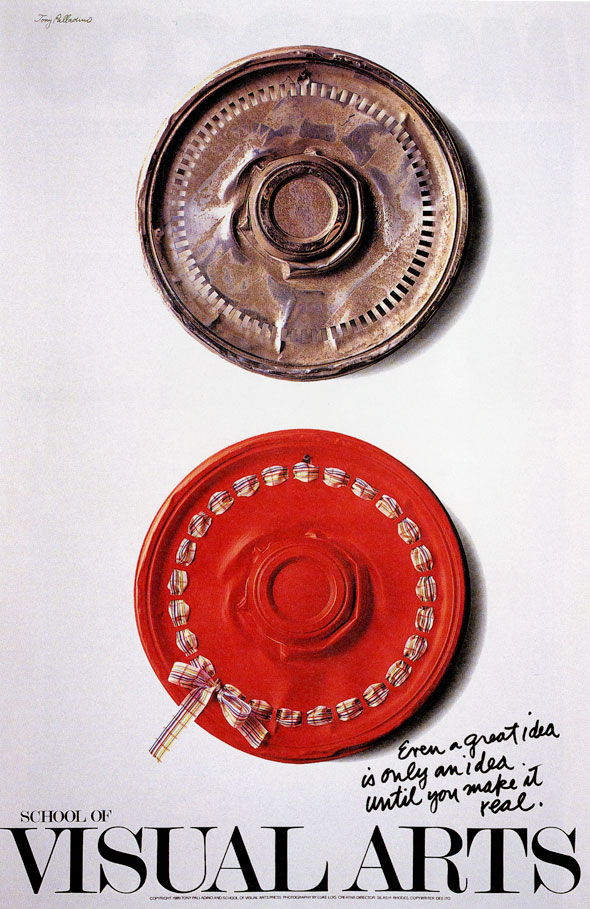 Tony was acutely attuned to the unexpected, but took every discovery in stride, as if it had been waiting there for him. In the 1950s, Tony would wander the outer reaches of New York City with Ivan Chermayeff, Tom Geismar, Robert Brownjohn, Bob Gill, and George Lois, taking photos of vernacular signage and drawing inspiration from the forms they saw. Tony discovered countless ways to imbue found objects with new meanings. In the 1960s, Tony and Ivan co-taught a very popular course at SVA in which they encouraged lively discussion and dissent as they explored what it means to create and experience design. They described one of their classes as “a design course intended to improve and broaden seeing in relation to other matters.”

To explore more of Tony’s incredible body of work, from books to logos to posters to lamps and espresso pots, look here and here. Examining all of this again myself, I see Tony’s sense of memory and inventiveness in every piece.

Ivan Chermayeff told this story in his introduction for Tony at the 1991 International Design Conference at Aspen:

We had an office on 51st Street and Third Avenue on the second floor on top of the Girl Scouts headquarters, nice little building. My office was on the corner. I finally noticed that Tony, who lived in the neighborhood just a little bit north of 51st Street, would walk by. His route was underneath my office. So, I always saw Tony, who was wearing the same hat that he’s wearing now, and this is many years ago, and he’d come by. I could see him out the window. I noticed there was a phone booth on the corner where he passed each day at 51st and Third Avenue. So I said, you know, of all the people in the world that I know, who would answer a phone ringing in a phone booth on the street in the middle of nowhere, it’s Tony. He’s the kind of guy that would answer the phone. If he’s going by, it rings, he’s going to answer it. So, I went down, and I got the number on the phone booth. I had it written down and I just sort of waited. It didn’t happen the next day or anything. It took weeks. Finally, Tony’s coming down the street. I always had a little bit of a lead because I could see him coming, and, you know, I’d wait for him. So I had it all there, and I dial the numbers except the last digit, right? Then Tony goes by, and I dial the nine on the end, and the phone rings. Tony picks up the phone just as predicted. Absolutely. I said, “Tony, don’t forget. We’re having dinner tonight, and don’t be late because it’s very important.” Then I hung up on him. Right? And he, typical real Palladino, he hangs up the phone and continues on his way, no problem. It’s absolutely true and that’s the way he is. There are not many designers who would behave like this.

Tony never failed to pick up the phone, walk through the door, open the window. He will be missed.