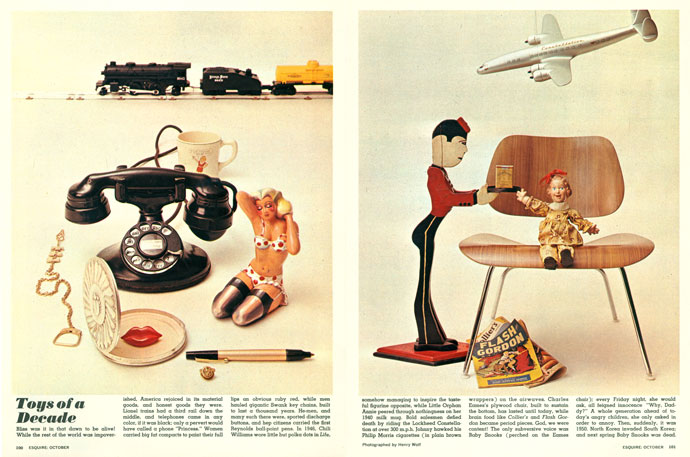 Henry Wolf art directed and photographed “Toys of a Decade” for the October 1960 Esquire. The text was full of familiar connoisseur’s details about an eclectic range of 1940s bric-a-brac. But it was presented in classic sixties prose style: partial acknowledgment of excess clothed in mock-rapturous anaphora:

Bliss was it in that dawn to be alive! While the world was impoverished, America rejoiced in its material goods, and honest goods they were. Lionel trains had a third rail down the middle, and telephones came in any color, if it was black … Johnny hawked his Philip Morris cigarettes (in plain brown wrappers) on the airwaves. Charles Eames’s plywood chair, built to sustain the bottom, has lasted until today, while brain food like Collier’s and Flash Gordon became period pieces. God, we were content! The only subversive voice was Baby Snooks every Friday night, she would ask, all feigned innocence, “Why, Daddy?” … Then, suddenly, it was 1950. North Korea invaded South Korea; and next spring Baby Snooks was dead.