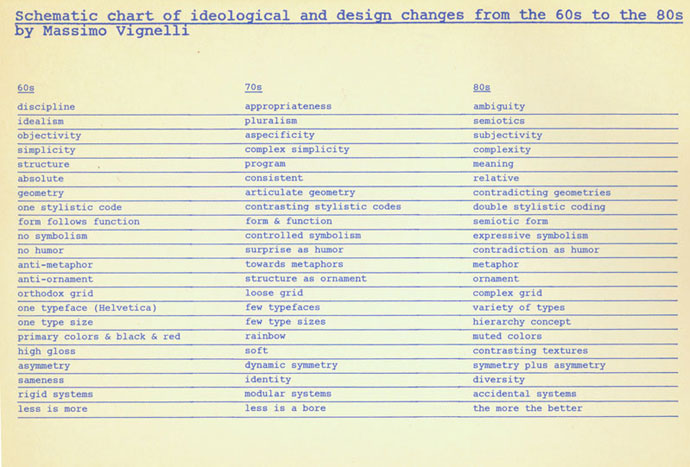 It surprises no one that the side of 60s design that Vignelli decides to focus on is the modularity and rigid systematization that he specialized in. There is very little here to represent movements and adaptations of purely graphical design, for example. The emphasis — for one thing, embodied in the form of the chart itself — is the typographic construction of information. This perhaps accounts for the endurance of the movement he identifies between the 70s and 80s, which remains a divisive line. By contrast, the ideological basis of the 1960s seems indefensible: ideas like “rigid systems,” “anti-ornament,” “absolute,” and finally “no-humor” seem to be arrayed specifically to attack the Swiss-grid school of Josef Müller-Brockmann (without really acknowledging the motivations of their severity). Conversely, choosing between an attitude favoring “consistency” over “relativity” or “ambiguity” rather than “appropriateness” seems a less tangible dialectic, and one often not really sufficiently contradictory to raise much argument. The headings for the second two decades could easily be “Modernism” and “Postmodernism” and this progression seems less linear than this chart would suggest: they would apply almost as neatly if relabeled “90s” and “00s.”

SEE ALSO Vignelli recently released the 2008 version of their canon — featuring the legendary “A Few Basic Typefaces” (which, it’s said, are the only six they allow).