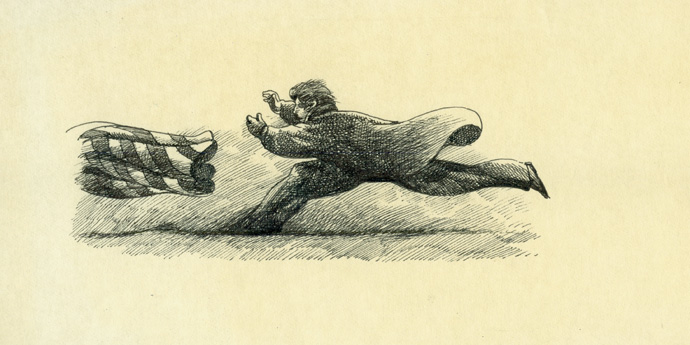 Milton Glaser worked on many book jackets for Philip Roth (both with Penguin and Houghton Mifflin), including the original Zuckerman trilogy; American Pastoral; Goodbye, Columbus; and others. Above is the sketch for his cover to Portnoy’s Complaint (1969). I really like the figuration of hands, and the Goreyesque flowing coat, gently bulbous in high early-Milton style. Though I think it may be a bit literal as jacket covers go, it does directly engage the controlling principle of the book, as listed on the first page (as if an imaginary a psychology encyclopedia entry) —

Portnoy’s Complaint n. [after Alexander Portnoy (1933- )] A disorder in which strongly-felt ethical and altruistic impulses are perpetually warring with extreme sexual longings, often of a perverse nature.

Flying after apparently-unoccupied parachute-like skirts at full sprint is a kind of perversion I guess.