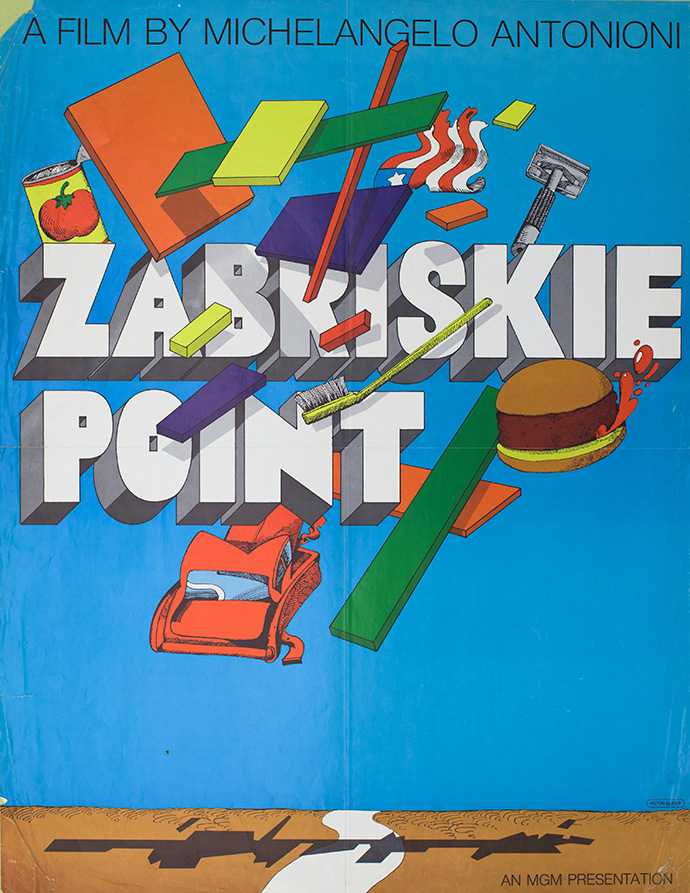 Reader Don O’Hara wrote us recently and mentioned some background material about Milton Glaser’s involvement in the process of marketing Michaelangelo Antonioni’s 1969 film Zabriskie Point. From a column by Kurt Brokaw in Independent Magazine:

Zabriskie Point was a counterculture sucker punch of a movie, a disaster of unimaginable magnitude, ugly, witless and condescending. Nonetheless, Glaser worked up a slew of fabulous posters—American flags set aflame by hippie protestors, closeups of police in ominous gas masks, custom-crafted peace symbols hanging between sweating breasts, et.al. The one-sheet exploratory comps certainly captured the movie and the era. We flew back to Rome and laid all this work at Antonioni’s feet. He stared at it and shook his head, “No no no, that is not my movie.” Meekly your writer asked what he felt his movie was. Antonioni said, “Do you recall the scene where Daria and Mark (the young iconoclasts who meet in Death Valley) make love in the sand?” Yes, for a minute or so of your 112 minute hate letter to America, ventured the writer. “That’s my movie,” said the director firmly, “And that’s your advertising campaign.” So it was, and is. Just another love story set in the valley of love. Truth in advertising.

We hope these “one sheet exploratory comps” for other variants will surface yet, but in the meantime Beth points out that the image at the top of the post includes a few of those things as well as several articles of familiar Glaserania. Don O’Hara also sends us the below image of a Greek poster for the film:

Particularly thrilling for me is the figure the evocative shadow the floating bric a brac casts on the desert floor. 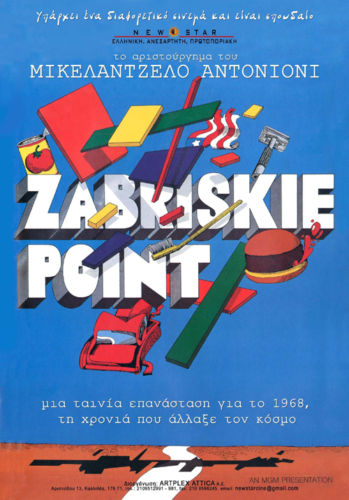