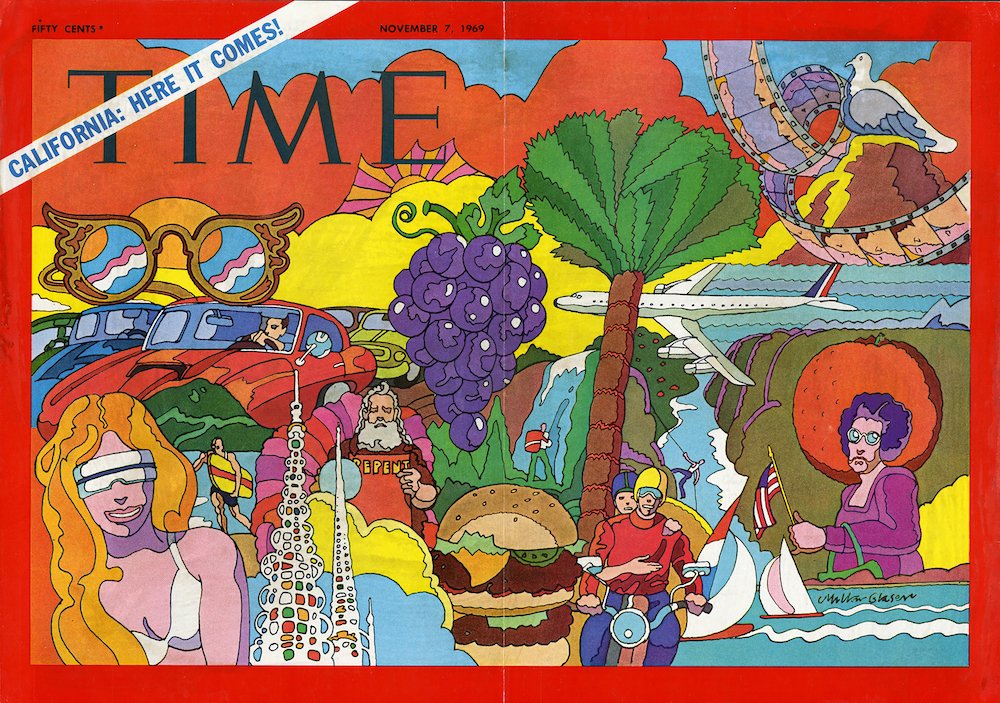 We chatted with Milton Glaser about the cover he created for Time magazine fifty years ago, the production methods of the late 1960s, and how he needed to move on from the style that had become so closely associated with him.

Q: Do you remember how this project came about?
MG: [Time] wanted to make a big deal out of a special section on California, so they decided to use a fold to extend the imagery. They wanted it in the way I working at the time, which was sort of pseudo-psychedelic, or maybe simply psychedelic, using some of the motifs that people associate with California in this style that said “Time magazine is really cool.”

Q: Did you have any impressions of California at the time?
MG: California was the place where these sort of experiments were happening. To some degree it was risky for Time to do this because it was transgressive. They were more interested, usually, in conventional photography or conventional illustration so I guess they wanted to signal hey, this one is different.

Q: Can you talk about how you arrived at this style?
MG: We did this in a labor-intensive way. First I would do a line drawing, and then I would modify the line drawing according to content. Then we would get a full-size photostat of the drawing and paste a product called Cello-Tak - little patches of colored plastic - like a stained glass window, in between the lines. It was all by hand, it would take hours. Fortunately it was the kind of work that could be leased out to somebody to do so I never had to do the filling in, I just did the line drawings. To some degree it was a means of increasing productivity without spending your money on high-priced talent.

Q: Was there a point at which you moved away from this process? Eventually Cello-Tak went out of use.
MG: Of course it was totally doomed by the computer because you could do everything in minutes that used to take days to do. But what’s interesting is the incredible patience of anybody who [did this work]; it was really like weaving a tapestry or doing a stained glass window.

Q: What do you think about this piece now?
MG: It looks terrible to me. I can’t stand looking at that stuff that I did in the sixties.

Q: Why is that?
MG: It just seems so innocent and crude and reductive. Every once in a while one of them looks okay, but otherwise it’s a mess.

Q: Well I have to say I don’t agree with that at all. But I think for any artist it’s hard to look back at your old work.
MG: It is hard. This is the dread secret of success in the applied arts: you do something well, and you become noted for doing that thing well, whatever it is, maybe it’s drawing rabbits, and then people come to you for doing it well and you keep doing it until you lose interest in it. But you still have to do it because that’s the basis [for your success]. That terrible dialectic is the heart of what’s wrong with the applied arts business. You just have to figure out a way out, and for me it was just leaving what had become acknowledged as my style and moving to something quite different.

Q: And hoping that everyone would come along with you.
MG: Hoping. Living in hope.

A version of this interview appeared in the Fall/Winter 2019 issue of the Visual Arts Journal.