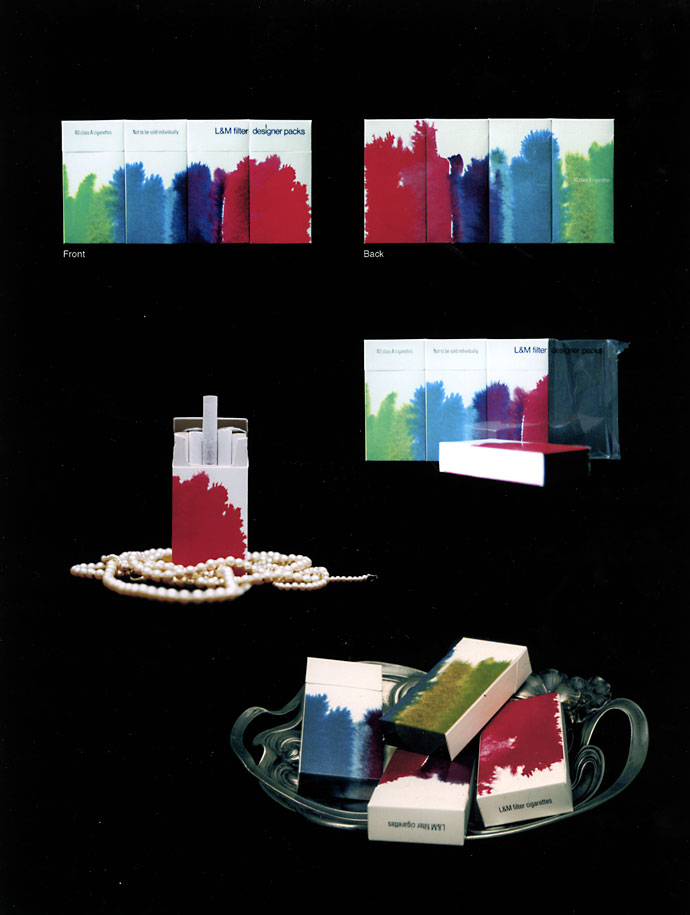 A couple months ago, we featured the gorgeous packaging George Tscherny created for Lark cigarettes. A fascinating article from the September 1968 issue of Industrial Design Magazine shows two more examples of Tscherny’s Designer Pack series and details Tscherny’s unorthodox ideas about cigarette packaging, which he was able to execute (at least in a limited market) thanks to the complete creative freedom afforded him by Liggett & Myers.

L&M’s Designer Pack concept was targeted specifically at women. Tscherny designed the packaging for the Lark, L&M and Chesterfield series so that all the type, except for the newly-mandatory health warning (“Caution: Cigarette Smoking May Be Hazardous to Your Health”), was printed on the plastic wrap; thus, the unwrapped pack was presented as an entirely decorative (and seemingly non-commercial) object. 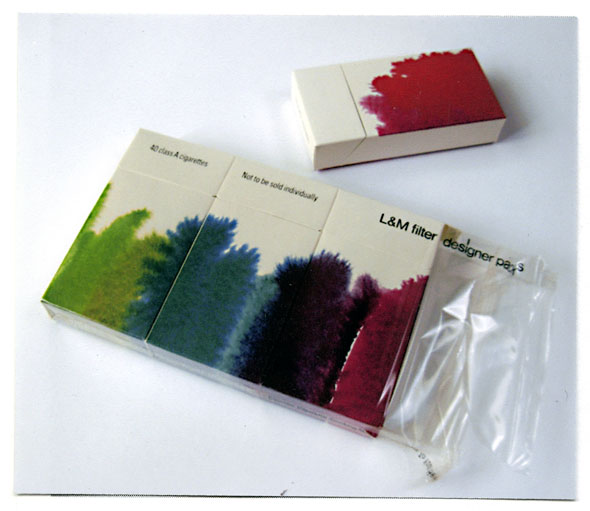 Tscherny was given free reign to design the packaging as he saw fit. He says in the article:

I had very few dealings with the client until we were ready to make the final presentation. Then we simply took the finished designs to the president of the company, explained how we arrived at the solutions, and showed him samples of some earlier efforts. He looked at my finished mock-ups and said “I like it – and I’m not easily pleased.” And that was it – actually it was the easiest presentation I’ve ever made.

In fact, one of the only alterations Tscherny had to make to his design was the typeface. The required health warning had to appear in 10-point Univers, so Tscherny changed all other type on the package (except for the product name, in Helvetica) to match. 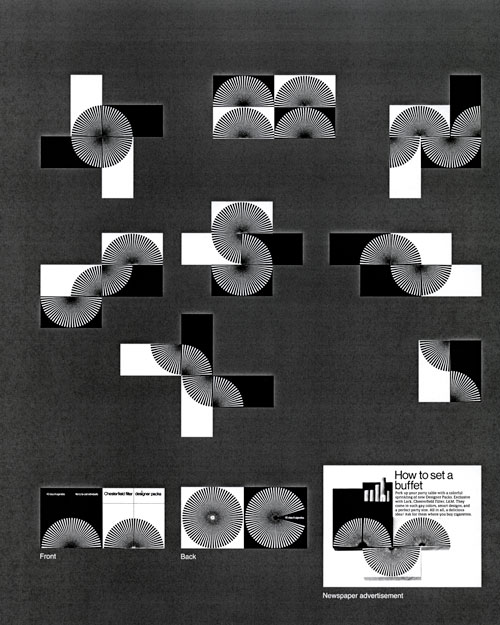 I was most interested in the article’s discussion of the debatable necessity of cigarette brand identification. John DiGianni (of Frank Gianninoto & Associates), who was involved with the design of many tobacco products, was dismissive of Tscherny’s avant-garde designs.

The Designer Pack concept may be the ultimate illustration of the importance of the package in cigarette marketing – provided they markedly increase sales. I’m highly in favor of the idea of printing brand identification on the disposable cellophane wrap, but I think the unidentified package must have enough character to establish an indelible link with the brand. And I doubt that what I call the “cosmetic” look of the Designer Packs… is very good for brand development, however charming it may be.

Tscherny, on the other hand, believed that a new invention would get much more attention in the saturated marketplace.

Cigarette packaging gets a fantastic amount of public exposure. Print advertising, television and retail displays saturate the public, so it takes very little time for new packaging to become established to the point that nobody could tell you what the old package looked like. As far as I can see, tinkering with an old design – cleaning it up a little now and then – is a big mistake. In fact, the more radical departures often get the quickest recognition.

Nonetheless, it does seem that Tscherny’s complex visual systems never made it to the mass market. The packs were test-marketed in New York City but may have been doomed by too narrow a marketing strategy:

Liggett & Myers began its campaign on the unsubstantiated (and probably false) assumption that the Designer Packs would appeal only to the “class” market. Distribution was limited to hotels and tobacconists in fairly prosperous neighborhoods, and a 10-percent premium was tacked on to the price. Supermarkets, where women do their shopping, were [initially] excluded. 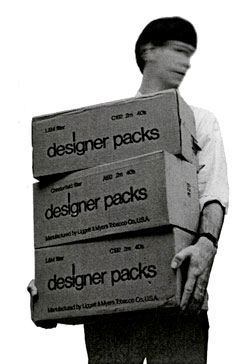 The article ends with a note that promotional opportunities for cigarettes were beginning to change quickly; tobacco companies would soon be subject to strict advertising constraints and would be required to print a more definitive consumer warning: “Warning: The Surgeon General Has Determined that Cigarette Smoking is Dangerous to Your Health.” Today, Tscherny doubts he would accept this commission, but there’s no denying the elegance and intelligence of the work.