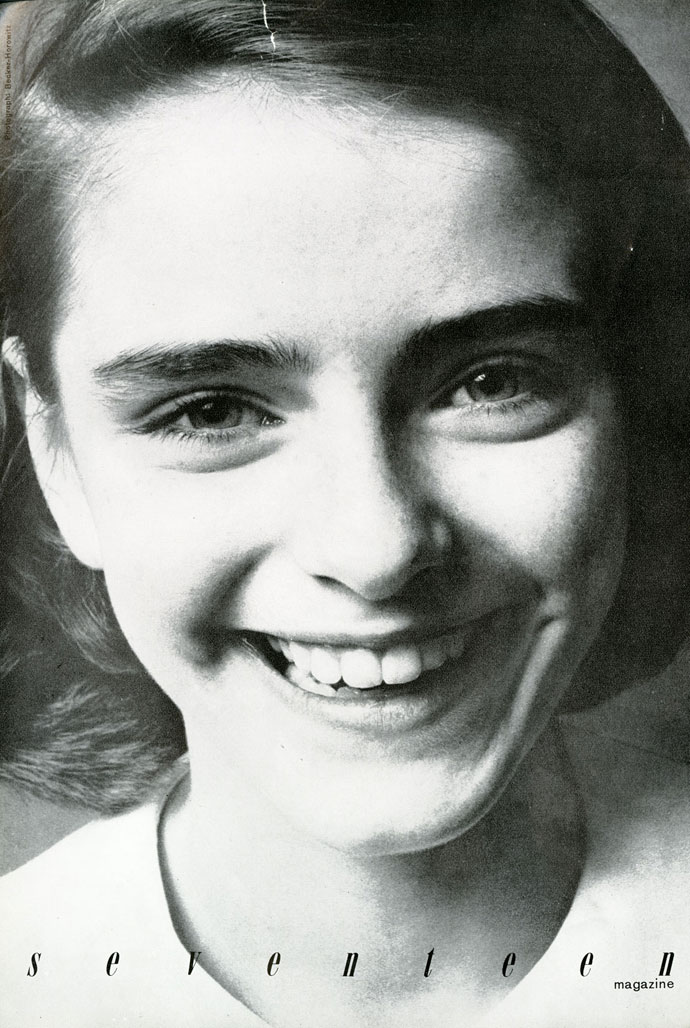 Ever since I featured that George Tscherny poster for a 1958 exhibition of art from Seventeen, I’ve been curious about the actual contents of the exhibition. The artists were an unexpected combination of some of the best illustrators and painters of the time. Art director Cipe Pineles—the first woman in the Art Director’s Club—solicited work from Jan Balet, Leonard Baskin, Lucille Corcos, Joe Kaufman, Richard Lindner, Evaline Ness, Robert Osborn, Doris Lee, Ad Reinhardt, Raphael Soyer, Ben Shahn, Jerome Snyder and Andy Warhol, among others. Her AIGA medalist bio (written by Martha Scotford) contextualizes this phase in her career:

After a short hiatus during World War II when she worked in Paris on a magazine for servicewomen, Pineles became the art director of the three-year-old Seventeen magazine, a radical invention directed toward a hitherto undefined audience: teenage girls. The founder and editor, Helen Valentine, addressed her readers as serious and intelligent young adults, rather than as the silly, only-marriage-minded girls other publishers saw. In support of Valentine’s mission to educate teenage girls, Pineles moved Seventeen out of the common idealized and sentimental school of illustration to use the best contemporary artists working in America. The reader’s visual education would begin with the best artists’ work.

Well as I was trawling through Art Director’s Club annuals from 1955 to 1961, I found — among the usual promos for ad agencies, paper companies, printers, and type compositors — a subdued sequence of ads for Seventeen. Minimalistic almost to the point of being empty, the photo-centric black and white ads sometimes achieve a serene power, probably from the unmediated photographic quality of the images (the credits are telling). 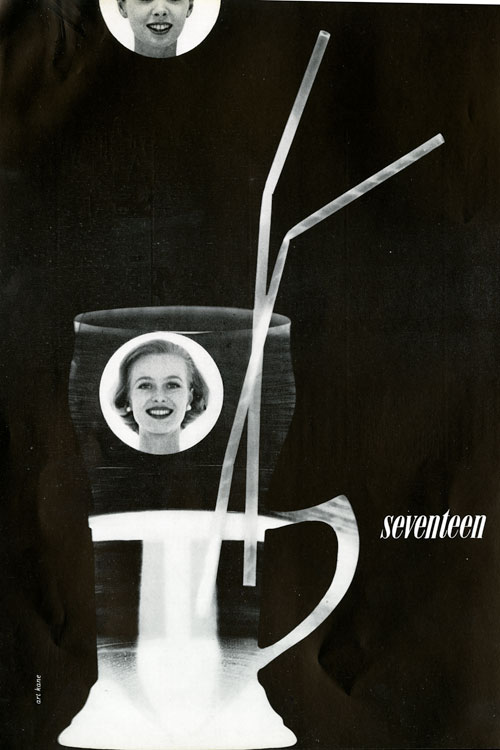 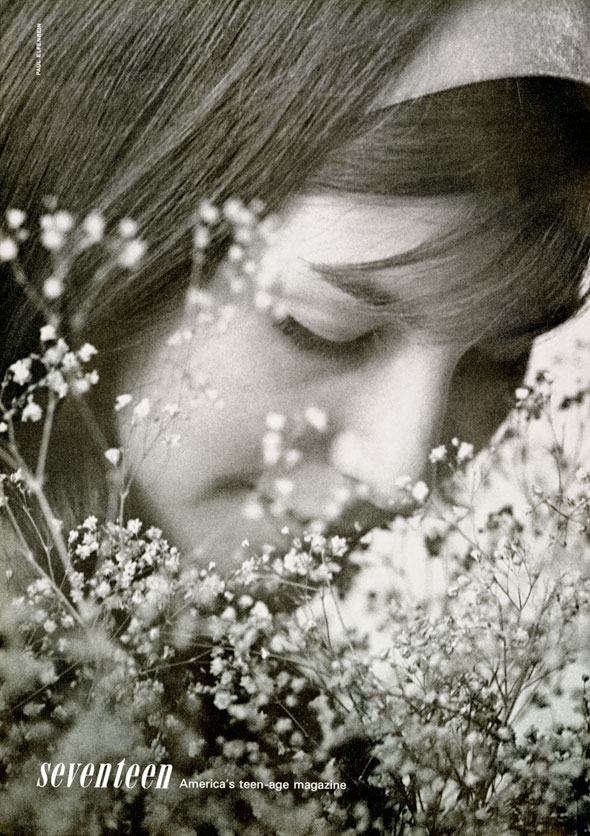 From the Art Directors Club Annual 37, 1958. Photo by Paul Elfenbein. 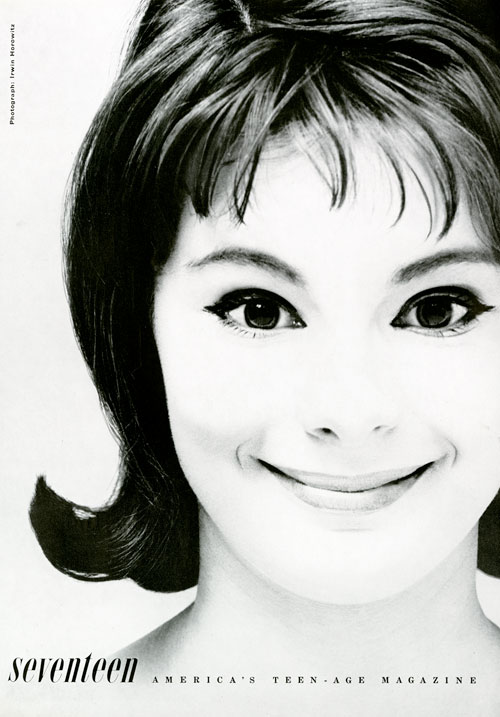 From the Art Directors Club Annual 38, 1959. Photo by Irwin Horowitz. 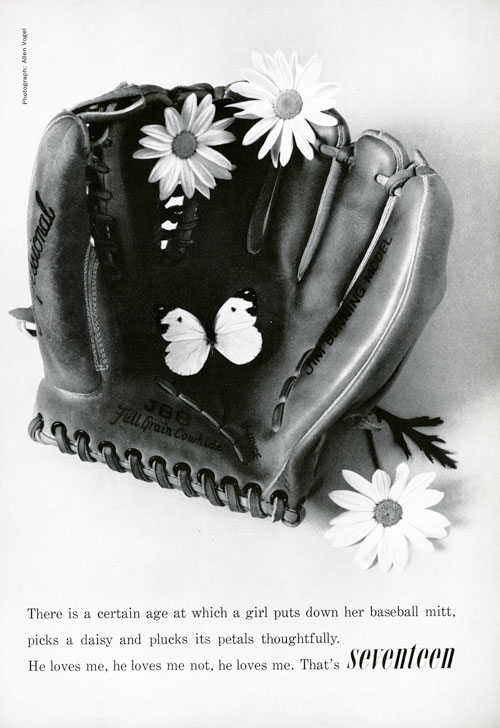 From the Art Directors Club Annual 39, 1960. Photograph by Allen Vogel. 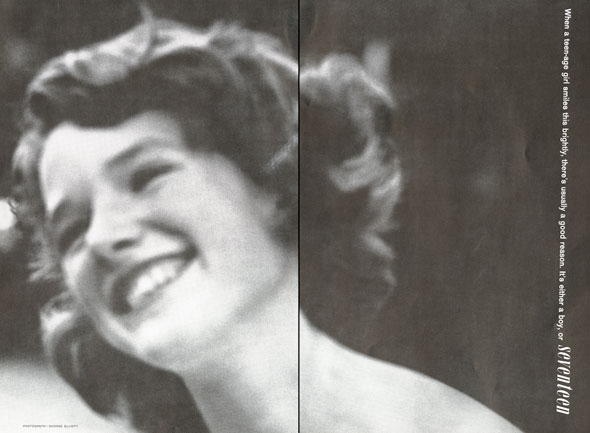 Seventeen also racked up a bunch of awards in the annuals themselves, including illustrations by Glaser and Chwast. Some scans of those next time. And one somewhat less expected name. Stay tuned.