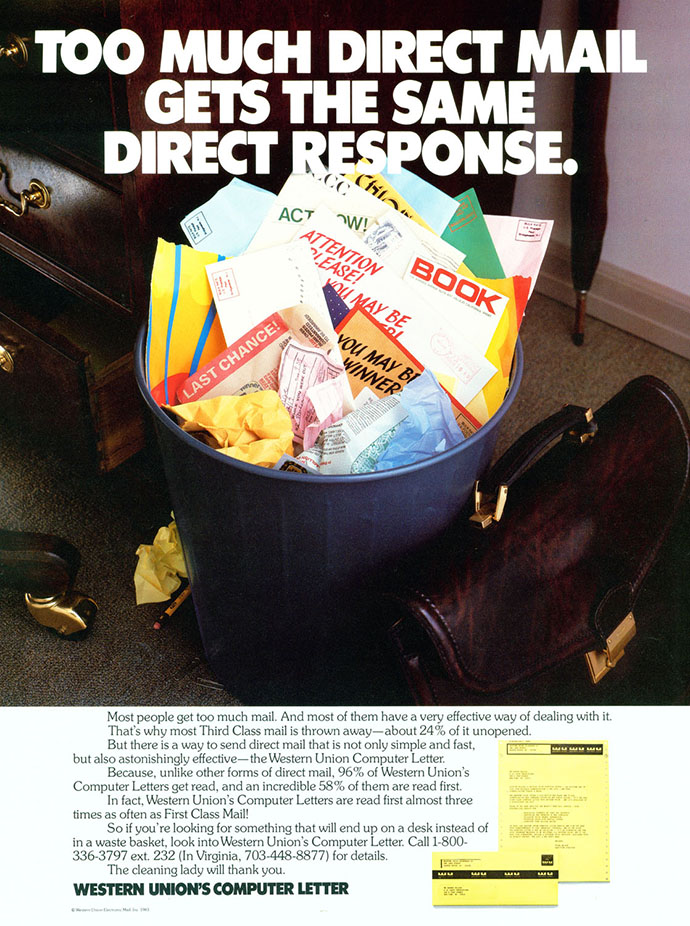 In 1983, Ed McCabe contributed the copy for this ad promoting Western Union’s new “Computer Letter“—a replacement for promotion through conventional mail in which customers can enter a message in a computer and have it transmitted through Western Union’s communications network and printed and delivered for its recipient. According to the copy, “96%” of these automatically produced messages get read, presumably because they resemble some kind of official communication, which also suggests this marketing strategy is a curious predecessor to email spam, which so often poses as something other than what it is.

According to a 1984 survey in Creative Computing magazine, Western Union customers savvy with primitive computers can even do this themselves, by logging into the company’s “EasyLink” network through a 300 baud modem (that’s 0.0375 KB/s) and entering some elaborate commands:

Computer letters come in three flavors: Computer Letter Service (delivery in three days), E-COM (delivery in two business days or less), and Overseas Priority Letter (delivered in two business days). To send a computer letter you first key in the EasyLink address, 62900396. This must be done beore you use a slash command to access one of the three services. Once you get the GA (Go Ahead) prompt you can then enter the /CLS (computer letter service), /ECOM, or /OPL (overseas priority leter) command.