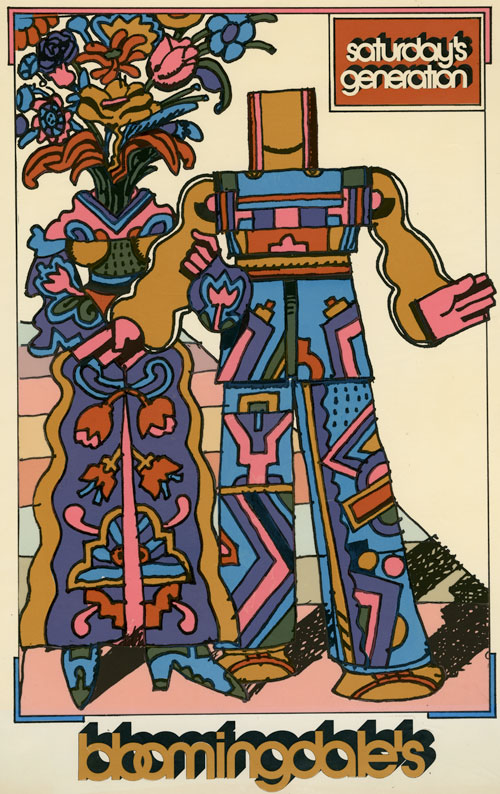 It’s 1970. You’re young, you’re bored in your Upper East Side apartment, you have a little money to spend. Bloomingdale’s tried to capture the weekend leisure time of this trend-seeking crowd with their “Saturday’s Generation” boutique, inviting customers to hang out in their curvy, psychedelic, over-the-top model interiors designed by Barbara D’Arcy (who, strangely enough, was also responsible for popularizing “Country French” style in American interior design). The in-store environments featured simulated aquarium living, inspiration from Earth Houses, and a structure called “The Cave”, which was wrapped entirely in white polyurethane. There was plenty of plastic, foam rubber, shag rugs, jagged greenery against soft curves, projected wall images. See here for some of the rooms, which were featured in Bloomingdale’s Book of Home Decorating (1973). A few more are here, including some (relatively) staid examples.

I don’t know if this groovy ad designed by Milton Glaser was ever produced; it seems to have gotten pretty far in the production process at least (this mechanical was done in cello-tak). There are plenty examples of flowers sprouting from human heads in Glaser’s ouevre — see, for one, this poster for the Push Pin Graphic, or his art for the Utopia record label (or, further down, the poppy shooting up from a concrete block for Poppy Records — a flower growing amok).